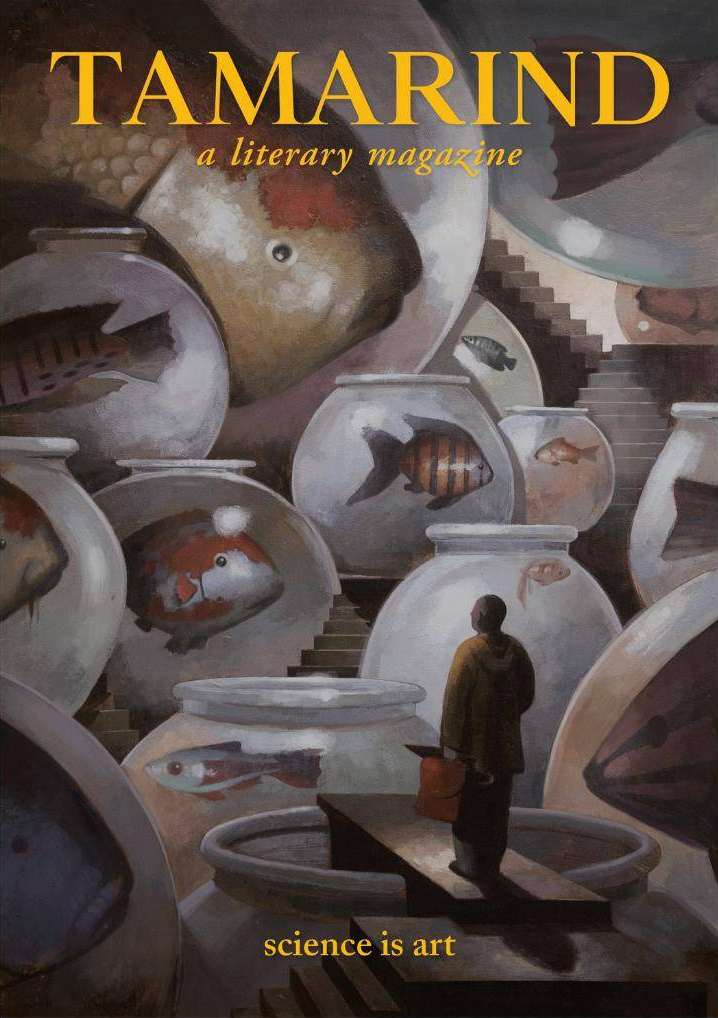 Issue 2 of TAMARIND is now available for digital download, and for pre-order in print. Issue 1 is also available to buy, while stocks last.

Outside the Box, Holly Day
Holly has been an instructor at the Loft Literary Center in Minneapolis since 2000. Her writing has recently appeared in Hubbub, Grain, and Third Wednesday, and her newest books are The Tooth is the Largest Organ in the Human Body, Book of Beasts, Bound in Ice, and Music Composition for Dummies.
hollylday.blogspot.com

The Symphony of the Atoms, Patricia Contreras Tejada
Patricia is a scientific communicator based in Spain. Her PhD in quantum technologies left her with the urge to connect science and society, which she endeavours to do through her writing and activism.

The Party, Tania Hershman
Tania is a former writer in residence in a biochemistry lab at the University of Bristol and the author of a poetry collection, two poetry pamphlets, three short story collections and a hybrid book inspired by particle physics, and co-author of On This Day She. Her second poetry collection, Still Life With Octopus, will be published in July 2022.
taniahershman.com | @taniahershman@twitter.com

What Came out of the Box, Aviva Treger
Aviva studied Ancient History at University College in London then later trained as an actor with Questors Theatre in Ealing. She recently returned to her home town of Hastings and finds its landscape to be an inspiration for strange stories.
@aviva321@twitter.com

In the Optical Afterglow, Lucy Durneen
Lucy is a writer and editor for the literary journal Short Fiction, based in the South West of England. She has been published in journals including Poetry Ireland Review, Two Thirds North, Litro, The Stockholm Review of Literature, and World Literature Today.
lucydurneen.com

Perhaps, Dan Brook
Dan teaches in the Department of Sociology and Interdisciplinary Social Sciences at San Jose State University in California, from where he organizes the Hands on Thailand program. His most recent book is Harboring Happiness: 101 Ways To Be Happy.

The Natural Point of View, Thomas Belton
Thomas is an author with publications in fiction, poetry, non-fiction, science writing, and journalism. He is also a frequent columnist for the New York Times, The Baltimore Sun, and The Philadelphia Inquirer.

The Intertidal Zone, Melody Hessing
Melody has taught Sociology and Environmental Studies in colleges and universities in British Columbia. Her academic publications include articles and textbooks, including This Elusive Wild: Women and the Canadian Environment and Canadian Natural Resource and Environmental Policy. She writes creative non-fiction to further explore the intersections of science, society and nature and to celebrate the natural world whose preservation she is passionate about.

Doppler Effect, Kasia Kokowska
Kasia graduated with a degree in journalism and social communication from the University of Warsaw. She moved to Scotland in 2006, and from 2011 to 2019 she coordinated a community project aimed at promoting Polish literature in Scotland. She currently works at the University of Edinburgh as marketing, communications and outreach manager and writes fiction and non-fiction in English and her native Polish.

In Conversation with Aifric Campbell
Aifric is an Irish novelist based in the UK. After thirteen years as an investment banker, during which she became the first female managing director on the London trading floor, she turned to writing full time. Her latest book, The Love Makers, explores the impact of AI and robotics on love, pairing her novel with essays by expert contributors. She teaches creative writing at Imperial College London.
aifriccampbell.com | @aifriccampbell@twitter.com

TAMARIND is a magazine about finding the art in science. In our second issue, this mission is explored in pieces that observe a moment in time from multiple perspectives and multiple realities. Our stories and essays are a vivid showcase of different writing styles: from a portrait of scientists in a dream-like Pisa, to an essay which uses unusual narrators to reframe the climate change discussion. The theme has been beautifully captured by our cover artist, Ryan de Carte, who left us with the thought that when you look into a fishbowl, you are seeing the fish’s whole universe, but when the fish looks back, it sees only a fragment of yours.

We’re all very proud of this collection and have been honoured by the quality and breadth of the submissions received. We feel that it represents a crystallisation of our mission to remove the barriers between art and science, and we hope you do too.