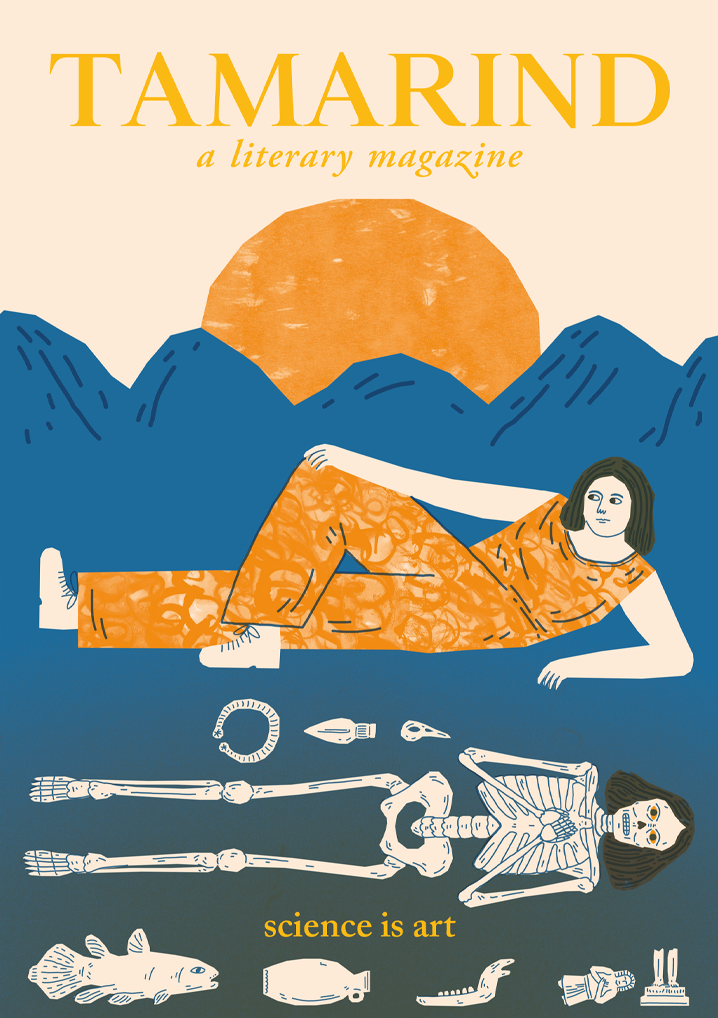 Issue 3 of TAMARIND is now available for purchase in both print and digital. Issues 1 and 2 are also available to buy, while stocks last.

You can now read and download current and past issues of the magazine online at read.tamarindlit.co.uk. Just enter your order number, issue number, and email address.

Considering the Role of the Female, Pippa Goldschmidt
Pippa Goldschmidt is a writer based in Edinburgh and Frankfurt. Her work includes Uncanny Bodies, The Need for Better Regulation of Outer Space, I Am Because You Are, and The Falling Sky, her debut novel.

Notes of a Naturalist, Thomas Belton
Thomas Belton is an author with publications in fiction, poetry, non-fiction, science writing, and journalism. He is also a frequent columnist for the New York Times, The Baltimore Sun, and The Philadelphia Inquirer.

Daddy’s Girl, Toshiya Kamei
Toshiya Kamei is a fiction writer working in English and Spanish. His short fiction has appeared in venues such as New World Writing, Revista Korad, and SmokeLong en Español.

Astrid’s Brain, Charlotte Crowder
Charlotte Crowder lives and writes on the coast of Maine in the US. She is a medical writer and editor by day. Her publications include stories in Intima, Branching Out: International Tales of Brilliant Flash Fiction, American Writers Review, and A Fine Orange Bucket (North Country Press).

Beyond their Time, Tristan Marajh
Tristan Marajh is a writer with work in a number of magazines, including Existere, The Bombay Review, Blank Spaces Magazine, The Nashwaak Review, and Ricepaper Magazine. Originally born in Trinidad and Tobago, he now lives in Toronto.

In Search of Nature, Anthea Lacchia
Anthea Lacchia is a freelance science and nature writer, and a journalist. She has a PhD on fossil ammonoids, extinct relatives of squid and cuttlefish. Her writing has appeared in The Guardian, Nature, Research Professional, and The Irish Times. She lives in Ireland, where she can often be found outside, hiking and birdwatching.

In Conversation with Benjamín Labatut
Benjamín Labatut is a Chilean writer. Born in Rotterdam, he spent his early youth in The Hauge and Buenos Aires before moving to Santiago. He has written several award-winning books, including La Antartica empieza aqui (Antarctica Starts Here) and Un verdor terrible (When We Cease to Understand the World), the latter of which was nominated for the 2021 International Booker Prize.

We all leave things behind: past versions of ourselves, things we create and share, and, eventually, whatever remains of our bodies when we die. Scientists and artists can have particularly long-lasting legacies; we remember the names of those who helped to cure deadly diseases, or those that created works that capture the imaginations of subsequent generations.

In this issue of TAMARIND we have a collection of enchanting short stories and non-fiction pieces examining what is left behind when we go. We travel from the distant past to the near future, sit with grief and love, and examine legacies both lost and found. We also speak with 2021 International Booker Prize nominee Benjamín Labatut, author of Un verdor terrible (When We Cease to Understand the World), about his creative process.

We are delighted to share this issue with you, beautifully illustrated by artist Benji Spence. As ever, we hope you enjoy reading it as much as we enjoyed making it.